Our Torah Scroll from České Budějovice was written in 1890

“To live, to commemorate, to inspire a saddened but not hopeless world, and to glorify the holy Name.” – Harold Reinhart

Czech memorial scrolls are now in use in many parts of the world. The United States has been the main recipient, but many requests from Israel have been met, as have others from virtually every country in which Jewish communities flourish freely. In addition, scrolls appropriate as memorials are to be found at Yad Vashem, at Westminster Abbey, in the Royal Library at Windsor Castle, and in many other places where they serve as an ever-living reminder of the Holocaust, and of those whom we must never forget, by striving to create a world wherein such injustice and horror become impossible.

Members of Temple Beth El made a trip to České Budějovice in 1990 on the centennial anniversary of the writing of the Czech Torah that has been entrusted to our safekeeping by the Memorial Scroll Trust of Westminster Synagogue of London. There they met with Lilly Černíková, who presented them with several memorabilia of the city’s former Jewish community, including the yellow star that she was forced to wear during the Nazi occupation.

1470
The synagogue of České Budějovice

1594
The synagogue of České Budějovice

1315
The synagogue of České Budějovice

1459
The interior of the synagogue

2048
A memorial plaque to the synagogue

1562
Inscription on the memorial plaque

2048
Another memorial to the Jews of České Budějovice

Five other congregations are keepers of memorial Torah scrolls from the town of České Budějovice besides Temple Beth El San Pedro. They are:

Here is the certificate which accompanied Torah Scroll #1067 to its new home: 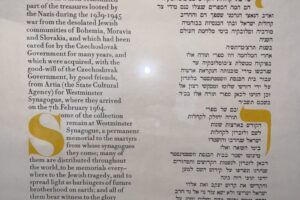 An entry regarding the synagogue and the history of the Jewish community of České Budějovice may be found in the Encyklopedie Českých Budějovic:

Entry in the Encyklopedie Českých Budějovic

The town of České Budějovice itself is the largest city in the South Bohemian region and its political and commercial capital. Jews had lived in the area since the 14th Century. Today České Budějovice is most well-known to Americans as home to Czech Budweiser, which is not the same Budweiser we drink here. That Budweiser is named differently because of a marketing dispute with the Czech government. 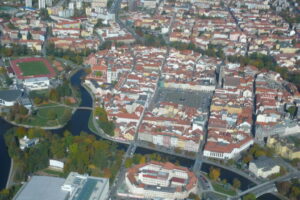 At the start of WWII 1,138 Jews lived in České Budějovice. In June of 1939, the offices of the congregation were closed. Jewish shops were attacked on July 21 and on August 16, 1940, Jews were forced to relinquish their homes. On April 18, 1942, 909 were deported to the death camps. Another 386 who had previously left the area were also deported during the war. Today, there are practically no Jews left in the area. All that is left of the Jewish community is the small stone monument where this majestic synagogue once stood.