Timeline of renovations and additions to the 7th St building:

The post-World War II decades saw immense change awaiting returning American GI’s and their families. While the war had decimated the countries of Allies and foes alike, the United States emerged virtually intact, with a wartime industrial capacity and workforce that would account for the vast majority of world GDP for decades to come. Notwithstanding the war dead and the dreadful toll of the Shoah, the country reveled in a spirit of optimism and adventure, as new ideas and social arrangements took hold, to wit the growth of suburbs, tract homes, shopping malls, fast food, and countless other trends that have defined the post-war years.

Los Angeles architecture experienced a mid-century modern explosion of unique buildings that would mark the city as a style unto itself. Simple materials such as stucco, steel, and wood were now used in imaginative and futuristic, even fanciful, ways. The renown residential architect, Richard Neutra, built many fine examples in this style and that of the International School of Architecture. Many of the buildings of this era are still greatly appreciated and even now preserved as historic landmarks. It is not difficult to see in them a source of inspiration for the architects who designed our original 66 year old building on 7th St and its additions, and who also drew nautical inspiration from the waterfront coastal location of San Pedro.

1920
Residential homes were given unusual shape and form

1700
Even gas stations could participate in the fun

On March 18th, 1956, the new 7th Street site of Temple Beth El and Center was dedicated with opening ceremonies and the transfer of the scrolls of Torah to the new building. Ground had been broken for the new building in July of 1955. Rabbi Jacob Halevi, leader of Temple Beth El for the previous 4 years, and Dr. Rudolph Rosenberg, President of the Congregation, presided over the dedication ceremonies. Though the new building was not quite finished, there was to be a main auditorium seating 350, several classrooms, offices, a kitchen, and a storeroom. The new building had cost just over $100,000. The new 7th Street “social auditorium and class rooms dedication exercise” had Dr Max Nussbaum of Temple Israel of Hollywood, and Rabbi Isaiah Zeldin, West Coast Director of the Union of American Hebrew Congregations, in attendance as well. 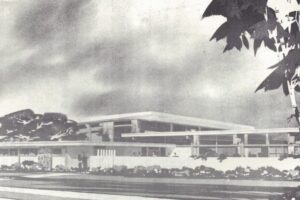 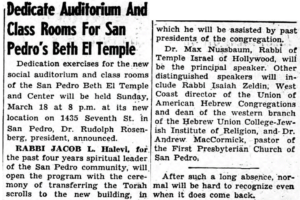 This clip from the B’nai B’rith Messenger of March, 1956 notes that the dedication of this first 7th St structure included only the new “social auditorium and classrooms” without mention of the “temple” as in the San Pedro News Pilot article – presumably the conceived but not constructed sanctuary that one can see in the background of the architectural artistic rendering above.

The sanctuary, with its evocative roof line of waves, was added and dedicated ten years later on September 10, 1966. In 1967 we acquired one of the 1,564 sacred Torah scrolls, which had come to Westminster Synagogue on February 7, 1964, having been gathered in Prague from the desolated synagogues of Bohemia and Moravia by the Nazi official in charge of the Czech “Protectorate.” Our Czech Memorial Scroll is number 1067 from the town of Ceske-Budejovice, then in Czechoslovakia. Several congregant families donated the Ner Tamid, the Ark, and two other Torahs, along with their ornaments. The sanctuary’s remarkable stained glass windows were installed, and the Zebulon menorah sculpture was commissioned. The Social Hall in the original part of the construction, although no longer needed for services, continued to be employed for many other Temple activities. In 1970 the first floor of the new south school wing was added, and in 1979 offices for the Cantor and Youth Director were completed.

2048
The sanctuary’s colored mosaic windows were a splendid addition

1536
Another view of these beautiful windows

2048
Sanctuary view with the Zebulon sculpture in the background

1828
Closeup of the Zebulon menorah

The next major addition to our 7th Street facility started on September 29th, 1982 when the Long Range Planning Committee presented its findings to the congregation. Then in April of 1983 a fundraising target of $1.2 million was set and on the 14th of April 1985 ground was broken for the new educational and administrative facilities. On November 10th, 1985 the newly enlarged Seventh Street facility was consecrated.

After nearly 30 years our 7th Street Shul was starting to need more than just a few repairs; it was in need of a major facelift. The entrance lobby was getting dingy and had always been dark and a little foreboding because of the low ceiling. But more importantly the entrance into the building was not easy and certainly not handicapped accessible, which was a principle motivation for this latest renovation of our 66-year-old building.

The Building Committee, headed by George Mayer and staffed by many talented, hard-working, and dedicated volunteers, had as one of their first duties the selection of an architect to design our renovation and update. Although the other candidates were excellent choices, the team settled upon the firm of Abramson and Teiger, which had recently completed the renovation of Temple Israel in Long Beach. A tour of that facility showed the potential of bringing a modern aesthetic refresh to an approximately contemporaneous structure as seen in the following images: 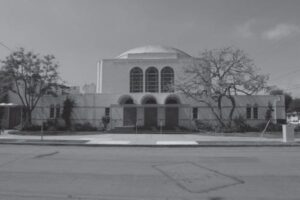 Once the schematic package was delivered by the architects, the Building Committee could examine their vision for the update to our facilities and they were pleased by what they saw: 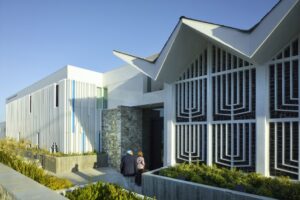 Architect's schematic - a much more spacious entrance with access ramp

1249
Architect's schematic - the social hall gets a fresh new look

822
Architect's schematic - the stairway is made beautifully modern

And so the construction work began in earnest in 2015: 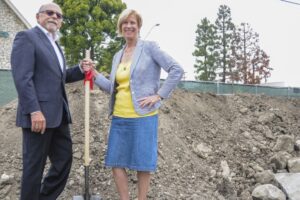 2248
Our kids at the groundbreaking help out with the demolition

1440
Work on raising the height of the main entrance hall

2560
Work on raising the height of the main entrance hall

2560
Work on where the new stairway will go

2560
Shoni, George, and Linda as the social hall is being built

2560
The building fundraising campaign recognition plaque in a temporary location

After much tireless, diligent, and dedicated labor of many talented volunteers and professionals, the latest Temple Beth El building project was completed. The results may speak for themselves: 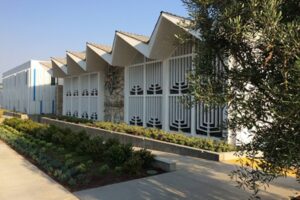 The front of the renovated building showing the new access ramp

1718
The new entrance as seen at night

2560
The recognition montage in its final place

2560
The new Yahrzeit plaques in the memorial alcove

A grand opening ceremony was held on Friday, June 2, 2016. Temple clergy, leadership, and members were joined by friends and dignitaries to help cut the ribbon, tour the newly renovated building, and chat and nosh a bit. 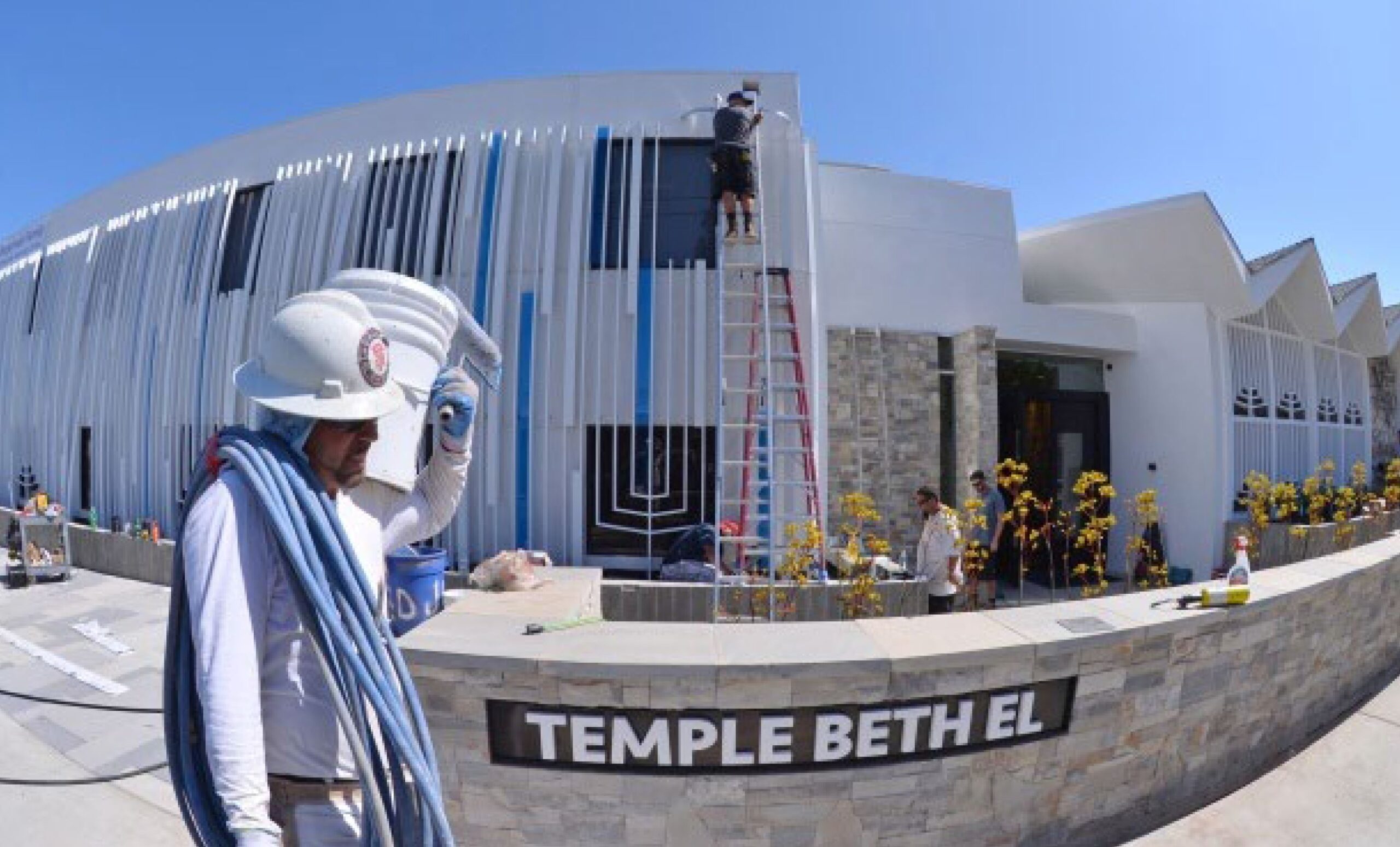