Temple Menorah will welcome producer and screenwriter David Brandes as he screens and discusses his moving film The Quarrel. This film is about two estranged friends, both survivors of the Holocaust, who have taken very different paths after their escape. One is a rabbi and the other a secular, agnostic rabbi – but they come together after many years to discuss their different lifestyles and choices. Based on a short story by Chaim Grade and written with input from Joseph Telushkin, The Quarrel is sure to interest all adult viewers. 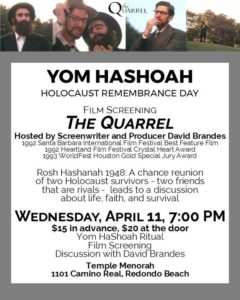